When Victoria Thigpen was hired as a barista at the PJ’s Coffee in Picayune, Miss., she didn’t quite know what her future would hold. She was planning on brewing up our savory southern flavors until she got back on her feet, but the universe had better things in store.

As it turns out, her manager was becoming a mom, and before Victoria knew it, she was promoted to take over. Today, after nearly a decade, Victoria is celebrating her biggest achievement yet; being the first recipient ever of PJ’s Coffee Phyllis Jordan award. 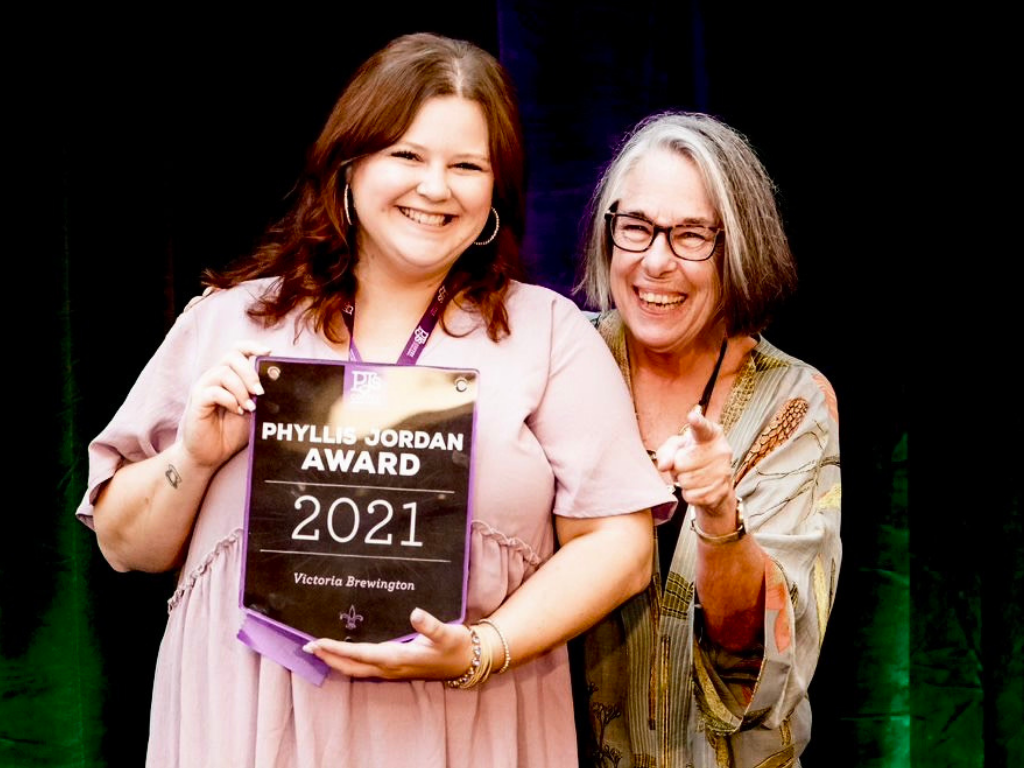 Working Her Way Up the PJ’s Coffee Franchise

Before Victoria began working at PJ’s Coffee, she worked as a waitress and was not the biggest “coffee person”. According to her, what made our award-winning franchise stand out was our southern hospitality mixed with “the best coffee she’s ever tasted.” Since then, she’s become a self-proclaimed “coffee addict” and is proud of every unique, mouth-watering cup of joe she serves.

Over the years, Victoria’s loved working at PJ’s Coffee so much that she’s worn many hats! After stepping up from a barista to assistant manager, she was then promoted to manager and continued in that role for eight years. It was 2019 when decided to “take the leap” to become a franchise business consultant at the PJ’s Coffee corporate office.

She loved to help aspiring franchisees bring their entrepreneurial dreams to life, and she did just that for a year and a half before returning as a multi-unit general manager for the PJ’s Coffee locations in Picayune, Ocean Springs and D’Iberville, Miss. as well as Covington and Slidell, La.

When Phyllis Jordan founded PJ’s Coffee in 1978, she did so with the belief that the pure passion for coffee-making mattered. That is something Victoria embodies every day.

The PJ’s Coffee corporate team created the Phyllis Jordan award to recognize female leaders within the franchise system who are doing remarkable work running their stores and making a positive impact on others. From serving our customers to going above and beyond in assisting our local communities and pushing limits and boundaries for the common good, this award recognizes a woman whose exceptional efforts today are paving the way for the PJ’s brand and the women of tomorrow.​

As the award’s first-ever winner, Victoria is honored to have been recognized with a namesake that means so much to her. She met Phyllis at a conference in 2018 and admired her so much that she even dressed up as her for Halloween one year. She was excited to meet Phyllis again at the award ceremony, but she certainly didn’t expect to be the winner.

“To me, winning meant that I represent PJ’s Coffee the way it’s supposed to be represented. I really was shocked, and I don’t think there’s any better award in existence that I could have won,” Victoria explained.

The Most Rewarding Part of All

Victoria is so honored to have been recognized for her hard work and dedication, but nothing compares to how rewarding her job is every day. For her, the best part of it all has been the connections she’s made with her employees, guests, community members and fellow PJ’s Coffee leaders.

“I owe so much of my success to Barry,” she says, speaking of Barry Predergast, the multi-unit franchisee who owns all five of the locations she currently runs. “He taught me everything I know and truly became like a father to me.”

When asked what her best advice is for other female leaders in the franchising industry, she emphasized the importance of simply being present.

“People want to see the faces behind the business. It makes them feel at home when they see it’s not just a ‘big corporation run by people in an office somewhere.’ All our locations are locally owned and operated, and there’s a reason we’re known for our southern hospitality.”

While Victoria’s already come so far with the PJ’s Coffee franchise, she’s always looking ahead to what’s next. Her biggest long-term goal is to open at least one PJ’s Coffee location of her own.

Are you looking to join a franchise that offers plenty of growth opportunities and recognizes those who go above and beyond? Contact us today to learn more about opening a PJ’s Coffee in your area.